What are the causes and symptoms of cervical discopathy (slipped discs)

The modern lifestyle does not have a positive influence on our spine condition. Lack of movement, improper posture, long hours spent in front of the computer, stress, and excessive muscle tensions strain the spine and wear it down.

The spine consists of 33-34 vertebrae, built from the body and facets, joined by intevertebral discs and joints. Bone structures of the spine and intevertebral discs are supported by spine ligaments. The biggest spine mobility occurs between the fifth, sixth, and seventh vertebrae. This is why cervical discopathy occurs in this region.

As a result of an unhealthy lifestyle, the spine degenerates: pathological changes influence the anulus fibrosus and nucleus pulposus in intevertebral discs. The aim of those structures is to protect vertebrae from wearing down and to absorb shock when moving. When we neglect beneficial movement and following a healthy lifestyle, we cause the anulus fibrosus to lose its elasticity and to dehydrate, or even to rupture. Then, the nucleus pulposus falls out of position and puts pressure on the nerves. 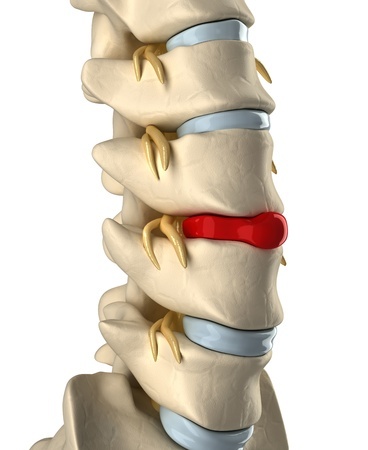 Nucleus pulposus cannot move back and forth, but only from side to side. Therefore, when it falls out of position, it can only pressure nerves on one side of the spine, not both. On the side where the pressure is applied, neurological symptoms may occur, such as: headaches, stiffness of neck and limbs, and nausea.

First changes usually occur between the fifth and sixth cervical vertebrae. If all the discs in this area become deformed, we suffer from spondylosis. It begins with a decrease in neck elasticity, followed by strong pain in the neck muscles. If nothing is done, the pressure increases, leading to strong pain and temporary paresis of the hand on the side of the pressured nerve. Unfortunately, damaged discs often pressure blood vessels and may cause brain ischemia.

Another common symptom of cervical discopathy is pain in the back of the head, often connected with high blood pressure. It can also be a result of changes in the cervical curve. If the changes in the cervical curve are the cause of pain, then the pain intensifies when moving the head backwards or forwards. Nevertheless, diagnosis is not easy because there are a variety of neurological symptoms: headaches on one side of the head (often confused with migraines), face pain and skin numbness, and a feeling of choking in the throat (which also occurs during heart attacks).